Did you ever wonder about "the eye of the storm"?
Is it really that calm in there? Everyone tries to get in there, but no one ever comes out... is it just bad luck?

Control the eye with the mouse, power yourself up by collecting positive and negative charge clouds (collect a positive when you are negatively charged and vice versa)

Thank you for voting!

The Eye of the Storm was ranked #1 in the Trijam!

The first thing that came to my mind when I read the topic.

I tried to spend as much time in the "time free" planning and concept phase.

Usually, I am very chaotic and change features and how things work every time I have a new idea. This time, it was very well planned. I made thoughts on how to animate the lightning, how to animate the storm.... and so in the end it saved a ton of time in the coding part.

I did one big session, started up Godot and coded like a madman, usually I test almost every two or three lines. This time I wrote whole blocks of code or whole scenes and then tested it, that sped up debugging time and - as the game is actually very simple - bug potential was kept to a minimum.

I also tried to shave time off the actual development by reusing old code snippets (which I do for most of my projects or prototype like the camera shake or the "random spawn in area" things.

Usually I love making my own assets, but for the sake of time, the only assets made by myself this time was the lightning circle, clouds, positive and negative icons and the storm texture.
I added two smaller ships to the fantastic ships (you'll find the link below)

I also tried to get some of the "extra goals", but I won't share the source since it is an incredible mess due to the time limit.

I wanted to include a dash mechanic... but honestly I ran out of time... it's maybe two lines of code but in the end the clock rang before it.

I'm happy with the result but I wish I had more time to polish it (online leaderboard and the graphics overall...)

Your first game Godot Tutorial (for the spawn mechanic):
https://godot-es-docs.readthedocs.io/en/latest/getting_started/step_by_step/your_first_game.html 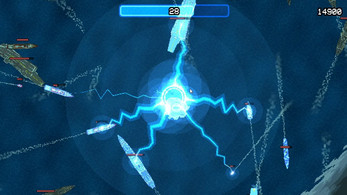 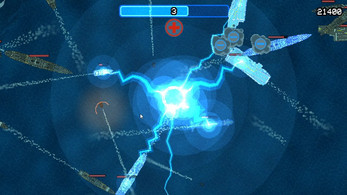 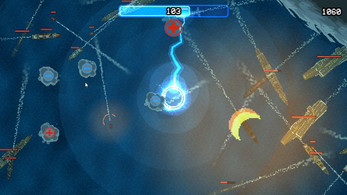